Foundation Church Belfast partners with International Justice Mission to answer God’s call to seek justice across the world. Listen to an inspiring message from our recent 2019 IJM Freedom Sunday here.

Last October, Belfast pastor David Varney joined other church leaders from the UK and Ireland on a visit to the International Justice Mission (IJM) field office in Ghana to see for himself how the world’s largest anti-slavery organisation is bringing justice, freedom and restoration to hundreds of children who have been trafficked into modern day slavery. David spoke to VOX magazine about the lasting impact of his trip and the lessons for churches in Ireland.

Five hours journey from Accra, the capital city of Ghana, Cape Coast is an old fort or “slave castle.” At the height of the Trans Atlantic Slave Trade, thousands of slaves were kept in dark, airless holding cells underneath Cape Coast before being shipped off to the Americas. To this day, the smell of death lingers, a legacy of horrendous injustice perpetrated on human beings made in the image of God.

Cape Coast is now a visitor centre and David Varney describes the poignant experience of being shut into a slave cell in such pitch darkness that it was impossible to see his hand in front of his face.

But for David, one of the most disturbing discoveries came after leaving the cells. Directly above those dungeons, separated by a few feet of stone, is a beautiful, bright and airy chapel overlooking the sea. In bygone days, people were worshipping God and listening to His word being preached while literally beneath their feet people were being held captive, treated like animals and bought and sold as commodities.

Struck by the proximity between the sacred and the evil, David said, “As the church, we can very easily condition ourselves and shut ourselves off from injustice, even if it is just a few feet away. We can turn a blind eye. At first, I was slightly puzzled as to why IJM took us to see [Cape Coast]. It was moving and terrible but that was years ago. We have a reaction against that form of oppression and we are angry at what our forefathers did. But do we have the same righteous anger about what is happening in our world today? If we are oblivious and uncaring, are we not just like our ancestors?” 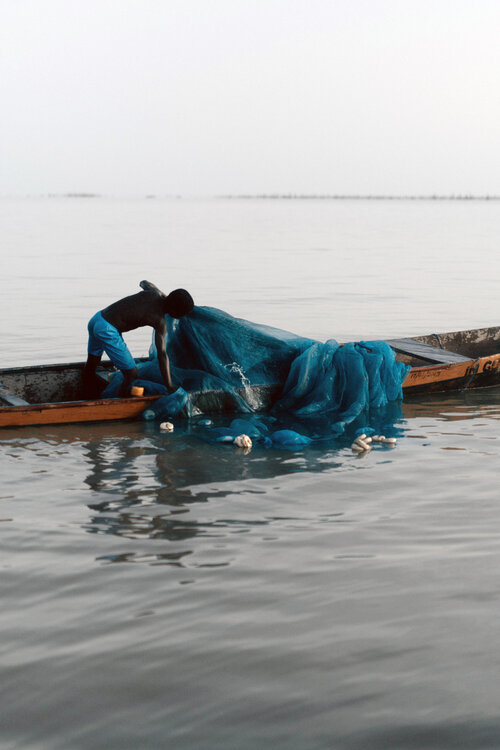 Ghana is home to the world’s largest man-made lake. Lake Volta occupies over 8,500 square kilometres (larger than County Cork). It was created to provide electricity and is home to a thriving fishing industry, but there is a dark side. Children as young as four are being trafficked into slavery to work on the fishing boats. They are treated like animals – working unpaid, without breaks or days off, in dangerous conditions and suffering severe malnutrition and neglect.

And yet Ghana is considered a Christian country with 75% of the population regularly attending church.

“An estimated 5,000 children have been trafficked into the fishing industry on Lake Volta and it is bewildering because many of the boat owners claim to be Christians and attend church,” David explained. “They are not skulking around in the shadows. This is considered to be part of their culture. Parents are sometimes even complicit in trafficking their own children, motivated by desperate poverty or greed.”

But it is in this challenging context that IJM has begun to make significant in-roads. From its field office in Accra, Ghana’s capital city, the IJM team is working at every level to eradicate the stain of slavery in the fishing industry on Lake Volta.

The IJM team recognises that it is not enough simply to rescue children from slavery (all too soon, they are replaced by other children who are trafficked and abused). Instead they are working at all levels to investigate and to successfully prosecute those responsible, alongside local authorities and law enforcement, to rescue and rehabilitate the children and to re-educate the local communities and churches to reject trafficking and slavery.

“Another of my stand-out memories from the trip was visiting a church (made out of breeze blocks) in a little village in the Volta region,” David said. “Suddenly a dancing band appeared with drums and colourful cultural dances. Local church leaders began to arrive from miles around. IJM’s church engagement team has been working with around 25 local pastors to study the Scriptures and start to understand what the Bible says about justice, and Bible study materials have been translated into the local languages.

“After the dancing, these church leaders began sharing how they have been gripped by what God says in the Bible about justice. It is as if they have heard the message of justice for the first time and a massive shift is taking place. Once these leaders understand what the Bible says about the injustice and oppression taking place around them, they begin to question what role the church needs to play in response.” 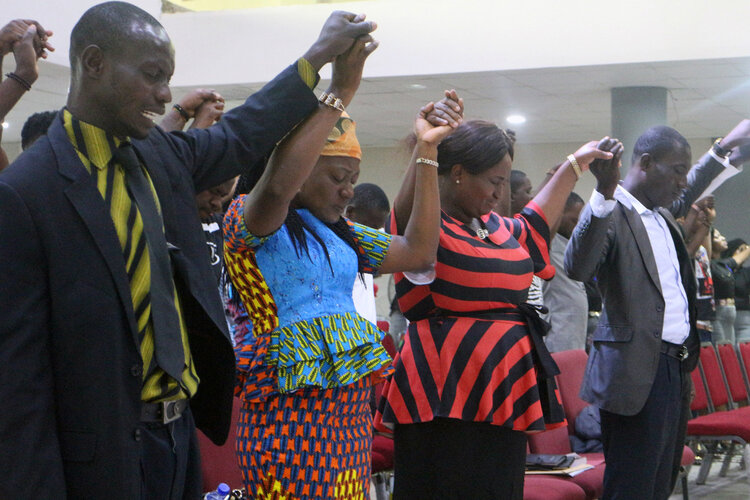 IJM partners with other organisations to provide aftercare for children rescued from slavery. Visiting one of these rehabilitation facilities, David saw for himself the impact of years of neglect and mistreatment. “There were boys up to the age of 16 and the youngest was a five-year-old who looked like a two-year-old,” he said. “Lack of safety, rest, nutrition and a nurturing environment stunts the growth of boys used as slaves in the fishing industry. Girls who are trafficked end up working on shore, but as they grow to physical maturity they are then treated as ‘prizes’ for the boys. It is a horrible pit of darkness, especially for the girls. At the rehab, there was a 13-year-old girl with a baby.”

Thankfully, the work of IJM has rescued these children and helped them to begin the long journey to recovery and restoration. The process can take many years, depending on how long the child has been held.

One boy – a 12-year-old who looked as if he was five – smiled for the first time in six months while David and the other church leaders were visiting. These children have learned to mistrust any adult and it takes a long time to earn their trust and support them towards healing.

The legal process is also lengthy. IJM works to build a case and to gather sufficient evidence so that when an arrest takes place, there is a high degree of likelihood that the slave owner will be convicted. It might take several years, and during that time the child will remain in the rehab facility while it is determined who was to blame for the trafficking (a child will not be sent back to an unsafe environment). Trained social workers, counsellors, educators and child advocates work in partnership to bring about lasting rehabilitation for the children. 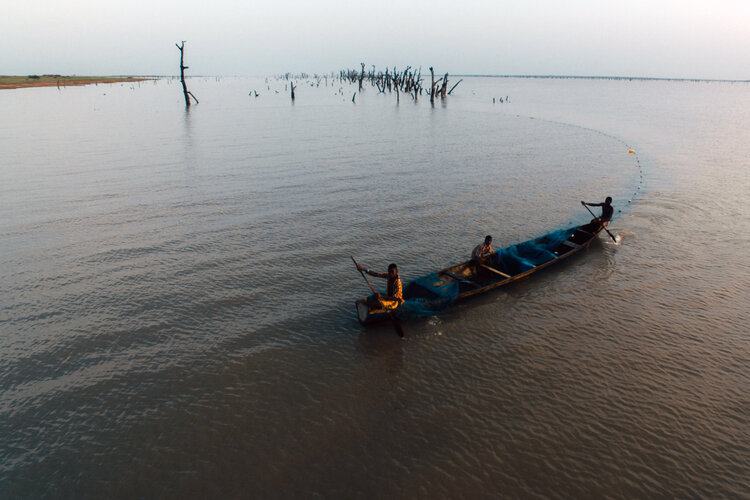 Hope in the face of oppression

“The trip was emotional and, at times, seeing and experiencing oppression up close was traumatic. But as a pastor from the west, I realise how incredibly fortunate we are. I came home highly motivated to do something about what I had seen,” David shared.

The trip brought home the reality of oppression. “Some of the blinders have come off, exposed to the reality of darkness. Because of our privileged position in the western church, we believe that bad things exist but until you see it, you don’t fully realise how vast and radically opposed to God’s purposes it is.

“But I also came back with a new sense of hope. We talk all the time about making a difference. When it comes to seeking God’s justice, I have seen that it does work. The IJM field office director in Ghana believes it is possible to eradicate slavery on Lake Volta as more and more people wake up to the reality of what is happening and work to bring about justice. They have that vision and they believe that with God’s help it can happen.” 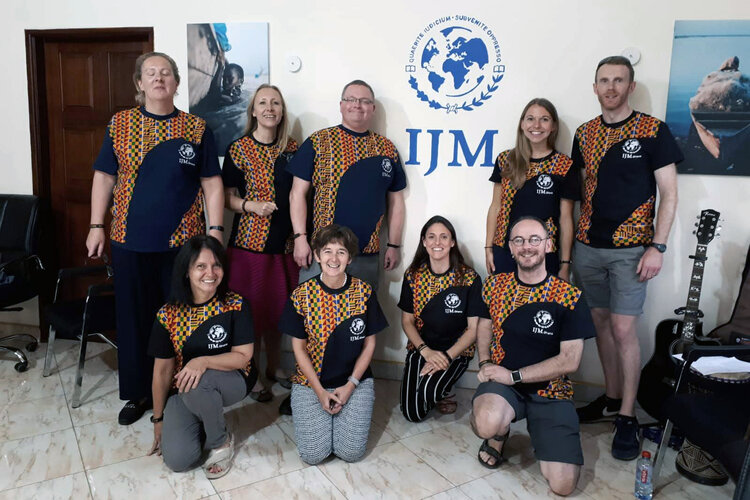 David and his family have been IJM supporters for many years but after returning home, he has a new sense of determination.

“We are a small church plant and it is very easy to develop a complex assuming we can’t do anything. That is something we are pushing against. We can contribute to bringing God’s kingdom even though we are small in number. That is God’s kingdom ethics at play – insignificant numbers but exponential difference.

“IJM make it so easy. From a church leader’s point of view, the resources they provide are so helpful. During Lent, each of us gave up a product that is associated with the slave chain (chocolate, coffee or make up) and IJM gave us suggestions of tasks we could do – posting on social media, writing to our politicians or contacting manufacturers to ask questions about where their products come from.

“We pray every Sunday and contribute a portion of all our fundraising to the work of IJM. As a church planter reaching out to Millennials, I’ve found that this generation are deeply concerned about justice. But because of what the Bible teaches, surely as Christians we should be more concerned about justice than those outside our churches? We should be more motivated than anybody to see an end to slavery and injustice.

“The Gospel is always more radical than we allow it to be and more challenging than I want it to be. Let us not be like the people in that Cape Coast chapel – singing hymns while there are slaves held captive beneath our feet!”

To find out more about the work of International Justice Mission visit the website at www.ijmuk.org.